What is Hermes? An overview. #

Hermes acts as a protected data circulation layer with cryptographic access control for your distributed application, with zero security risk of data exposure from servers and storage.

Hermes allows deploying end-to-end encrypted data exchange, sharing, and collaboration in your apps. Hermes is platform-agnostic: it works for mobile, web, or server applications storing data in any database/datastore.

Hermes-core is a proof of concept implementation for Hermes — a practical data security scheme with the reference implementation, which enables distributed sharing and collaboration, enforcing access control cryptographically, while the maximum possible number of security guarantees for the protected data is preserved even in the case when one or more parts of the system are compromised.

Hermes in a nutshell #

Hermes-core is a proof of concept for Hermes – a practical data security scheme with the reference implementation, which enables distributed sharing and collaboration, enforcing access control cryptographically, while the maximum possible number of security guarantees for the protected data is preserved even in the case when one or more parts of the system are compromised.

Hermes is an end-to-end encryption methodology for manipulating structured records with crypto-controlled CRUD rights. Hermes-core is a proof-of-concept implementation of Hermes as a standalone library, which can be easily embedded into a networked or local application.

Hermes maps privileges — read, write, update, delete — to cryptographic keys, in arbitrary granularity towards protected object’s structure. Hermes does that via cryptographic process, so no attack on Hermes’s execution flow can affect the protected data - in the worst case, it will lead to nothing worse than a denial of service.

Access is managed via private keys, sharing, and permission set assignments. These procedures rely on the use of Public Key Infrastructure. A bare-bones version of such infrastructure is aimed at easy integration using a simple flat file storage because Hermes is aimed at integration with any data and trust sources.

Hermes is a proprietary framework licensed by Cossack Labs.

Hermes-core code repository is open-source (AGPL 3.0), created for developers and security community to illustrate the proof of concept of Hermes, which should be used for studying and verification of the methodology and cryptographic backend. Hermes-core is not a production version of Hermes but more of a sneak peek at its core layer.

Drop us an email to info@cossacklabs.com if you are interested in commercial license for Hermes or support.

What’s so unique about Hermes #

Hermes represents a practical scheme that takes into account a number of important requirements:

When at least some of the aforementioned requirements are fulfilled, it significantly increases the security level of the system.

Use cases and industries #

A typical use-case for Hermes: an online medical service where the patients securely interact with the staff of multiple medical institutions. For example, a patient’s records contain a number of results for medical examinations. The patient’s personal physician needs to be able to access all of them, while the employees of the medical institutions need to be able to access only the latest results to adjust their activities towards the patient. Leaving access control management to a medical service opens up a risk of an accidental privilege misplacement or an intentional data leak. Being able to manage the access permissions only from trusted endpoints enables provable security for collaboration of such datasets.

The access control distribution in Hermes is based on possession of cryptographic key and is much stronger than traditional operation guidelines and algorithmic mechanisms.

Hermes allows using servers with limited trust level. A server is only used for storage of encrypted sensitive data.

Why Hermes does it better #

Hermes (and correspondingly, Hermes-core) is built on top of Themis, which is a high-level cryptographic services library that allows you to protect data at rest (in your database, files or wherever you store them in your application) and data in motion (e.g. travelling between client and server, server and server, application and application, etc.).

Hermes operates with data that is subdivided into records that represent the hierarchy of recordsets and groups of recordsets. Each blob of data is encrypted using a symmetric key, from which a set of hashes is generated. Possession of a symmetric key by a user allows reading and carrying out other processes on hashes (including with writing data).

In Hermes-core a document equals a block and is not subdivided further as it is a basic building block for the hierarchic infrastructure of Hermes. 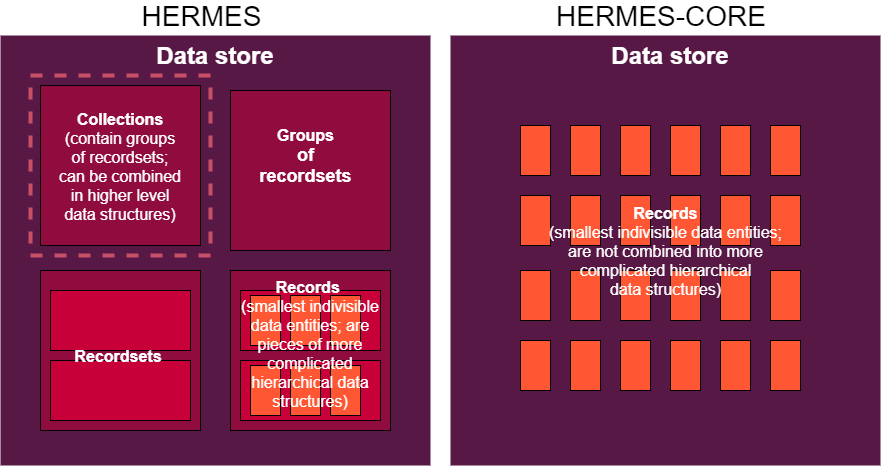 There are 3 storage entities in Hermes (and, consequently, in Hermes-core) that constitute the Server side:

The 4th entity of Hermes is Client:

This is a table of common terms used to describe the processes and notions of Hermes (and, consequently, Hermes-core).