Refer to AcraTranslator architecture page to find out deep description of internals and how it works.

There are multiple ways to install AcraTranslator. You will also need utilities like acra-keys that come along.

You will need some keys in order to launch AcraTranslator, so let’s do it first.

The first one will be used to protect all the other keys, it should be base64-encoded and passed to Acra services in ACRA_MASTER_KEY environment variable.

The second key is responsible for data encryption. There are actually more kinds of keys, read more about that on Acra keys inventory.

It is also possible to store keys in a Redis database, see Scalable KV storages.

When generating a key, you will always have to bind it with a Cliend ID or Zone ID. AcraTranslator distinguishes requests by Client ID and uses different encryption keys for different client ID.

Architecture and DataFlow of AcraTranslator-based infrastructure # 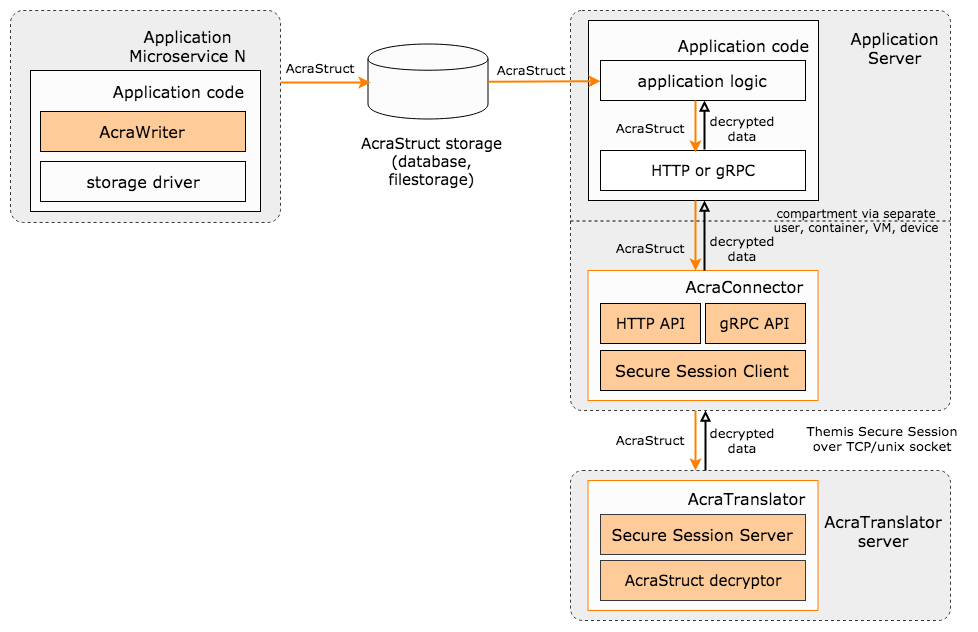 Acra design values simplicity as much as security.

AcraTranslator reads decryption keys from key folder and stores them encrypted in memory. It uses LRU cache to increase performance by keeping only actively used keys in memory. The size of LRU cache can be configured depending on your server’s load.

Note: AcraTranslator supports ability to use [TLS] as encryption channel instead of Themis Secure Session. In such case, you don’t need to use AcraConnector, but you should manage all your TLS certificates manually.

AcraConnector is as intermediate proxy between the application and AcraTranslator. Why would you need yet another proxy? Well, there are a couple of reasons:

AcraConnector usually lives on the same host as the application, but is isolated a bit (running as different user, in separate docker container and so on).

Read more in Client side encryption with AcraConnector and AcraWriter.

Changes on application side #

One of the things available in enterprise edition is part of SDK called AcraWriter that allows data encryption right inside the application for Encrypt operations via gRPC/HTTP API calls.

If the client application is hacked, and the attacker is trying to decrypt all the data, you can detect it using poison records.

AcraTranslator (similarly as AcraServer) has ability to detect poison records and stop executing the request, preventing the data from leaking to an untrusted destination. To learn more about AcraTranslator cmd configuration you can refer here.