AcraTranslator is an API server, that exposes most of Acra’s features as HTTP or gRPC API with client SDKs and traffic protection. This element of Acra is necessary in the use-cases when applications store the encrypted data as separate blobs (files that are not in a database - i.e. in the S3 bucket, local file storage, etc.).

By its nature, AcraTranslator is a separate daemon that runs in an isolated environment (separate virtual machine or physical server). AcraTranslator is responsible for holding all the secrets required for data decryption and for actually decrypting the data.

AcraTranslator doesn’t care about the source of the data, it accepts AcraStructs or AcraBlocks via HTTP or gRPC API. An application can conveniently store crypto envelope anywhere: as cells in the database, as files in the file storage (local or cloud storage, like S3). An application sends AcraStructs or AcraBlocks as binary data and receives plaintext (or decryption error) from AcraTranslator.

However, sending plaintext data via a non-secure channel is a bad idea, so AcraTranslator requires usage of Themis Secure Session (deprecated since 0.91.0) or TLS encryption channel (which is basically encrypted TCP/UNIX sockets). To establish a Themis Secure Session connection, an application doesn’t need to include the crypto-code itself, only to direct the traffic through AcraConnector instead.

AcraTranslator is your main choice when your application should make encryption calls, or you use NoSQL/KV datastore.

AcraTranslator provides an API (either gRPC or HTTP) for applications giving them the ability to perform different data protection operations, like encryption/decryption, generating hash for searchable encryption, tokenization/detokenization.

Your application doesn’t need to handle any cryptographic code or have access to any keys.

We outlined typical dataflows for AcraTranslator in the Dataflow chapter.

Here is the simplest connection: 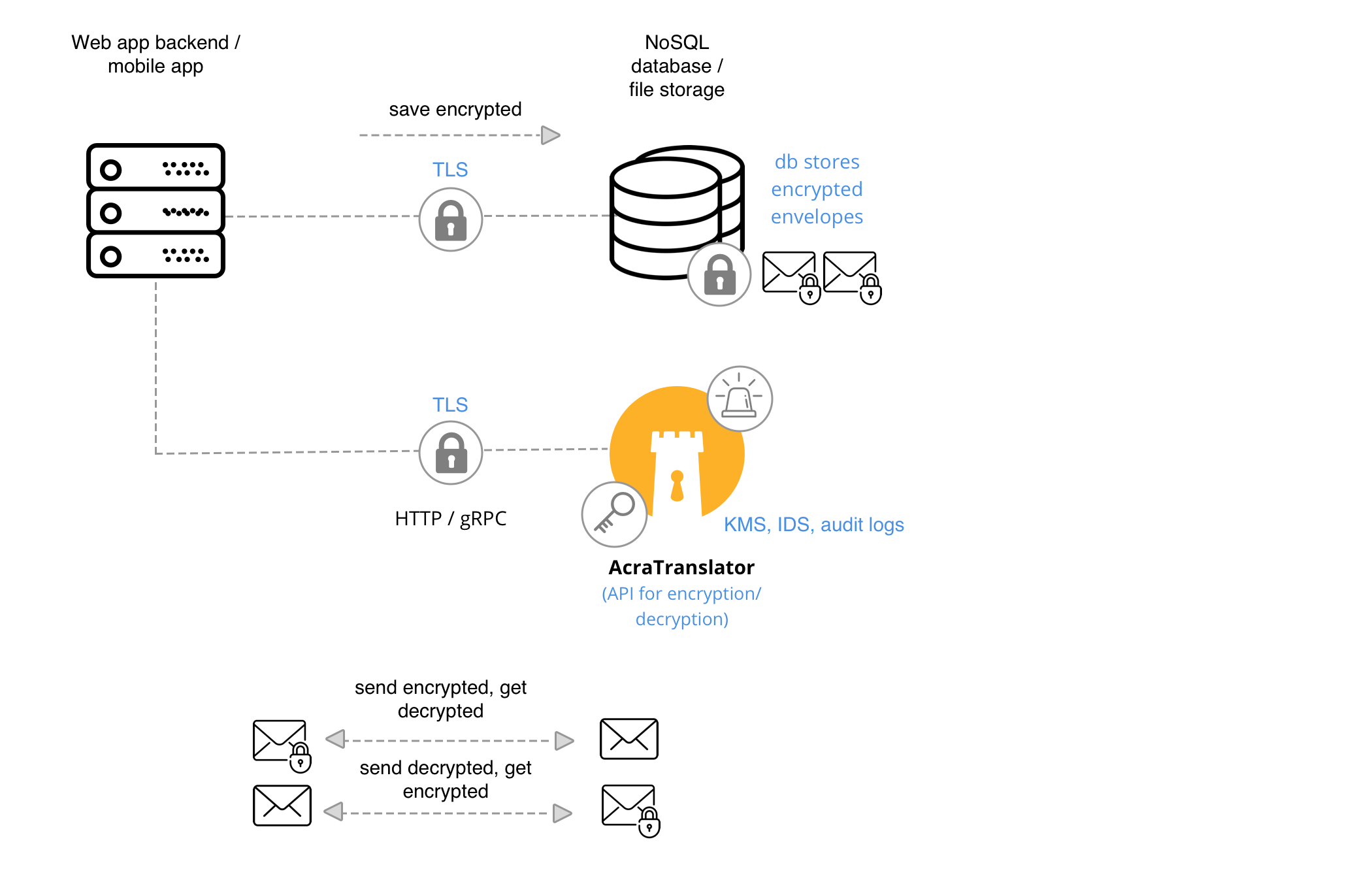 Acra provides SDK for AcraTranslator to improve working with its API and make integration easier.

Except talking with the client app, AcraTranslator also connects to other parts of your system. Some connections are required – for example, if you place Acra Master Key to KMS, AcraTranslator should know how to connect to the KMS.

Other connections are optional – for example, you can use Redis as external key storage for intermediate keys (useful when you have a cluster of AcraTranslator), or put them into FS on AcraTranslator side. 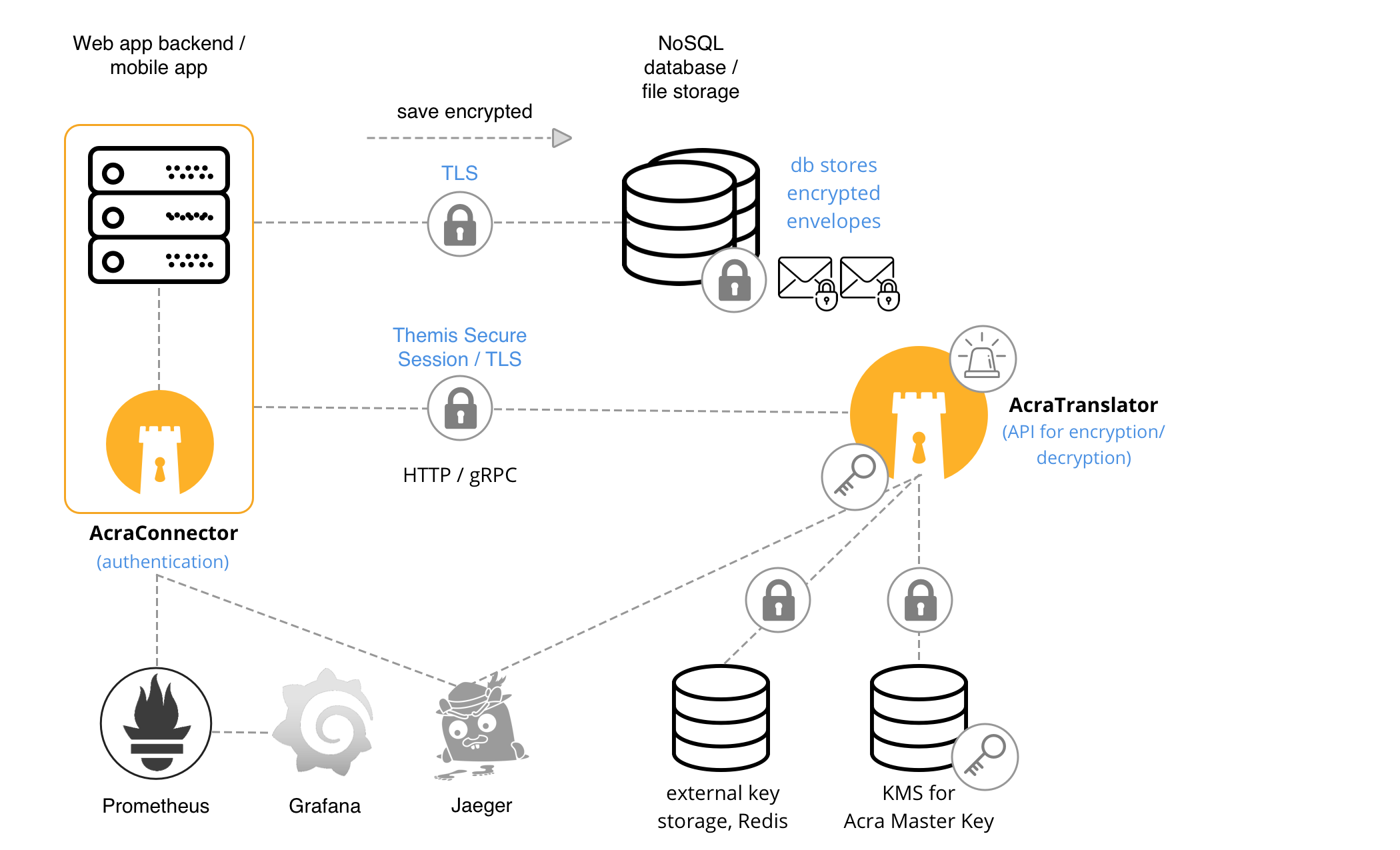 Similar to AcraServer’s recommendations, it is strictly recommended to host AcraTranslator on a different machine (virtual or physical), isolated from both client applications and the database.

This comes from the fact that Acra works with a sensitive data (such as encryption keys) and isolation will decrease risks of other components doing malicious things with it.

However, in cases when you need to make application the only component that interacts with plaintext, AcraTranslator won’t help you, you will have to use things like AcraWriter to encrypt data on application-side before it leaves.

Refer to Scaling and HA to learn how to scale and support growing infrastructure when you use AcraTranslator.