AcraServer is also known as SQL Proxy. It’s an SQL database proxy that exposes Acra’s functionality by parsing SQL traffic between an app and a database and applying security functions where appropriate.

If you’d like to encrypt the data between your app and SQL database “transparently on-a-fly” then AcraServer should be your main choice.

AcraServer sits between your application and MySQL/PostgreSQL database and does the following:

Refer to Integrating AcraServer into infrastructure to learn how configure AcraServer.

Your application doesn’t need to handle any cryptographic code or have access to any keys.

We outlined typical dataflows for AcraServer in the Dataflow chapter.

Here is the simplest connection:

Client application connects to the AcraServer, which works as a reverse-proxy for SQL database.

Except talking with the client app and the database, AcraServer also connects to other parts of your system. Some connections are required – for example, if you place Acra Master key to KMS, AcraServer should know how to connect to the KMS.

Other connections are optional – for example, you can use Redis as external key storage for intermediate keys (useful when you have a cluster of AcraServers), or put them into FS on AcraServer side. 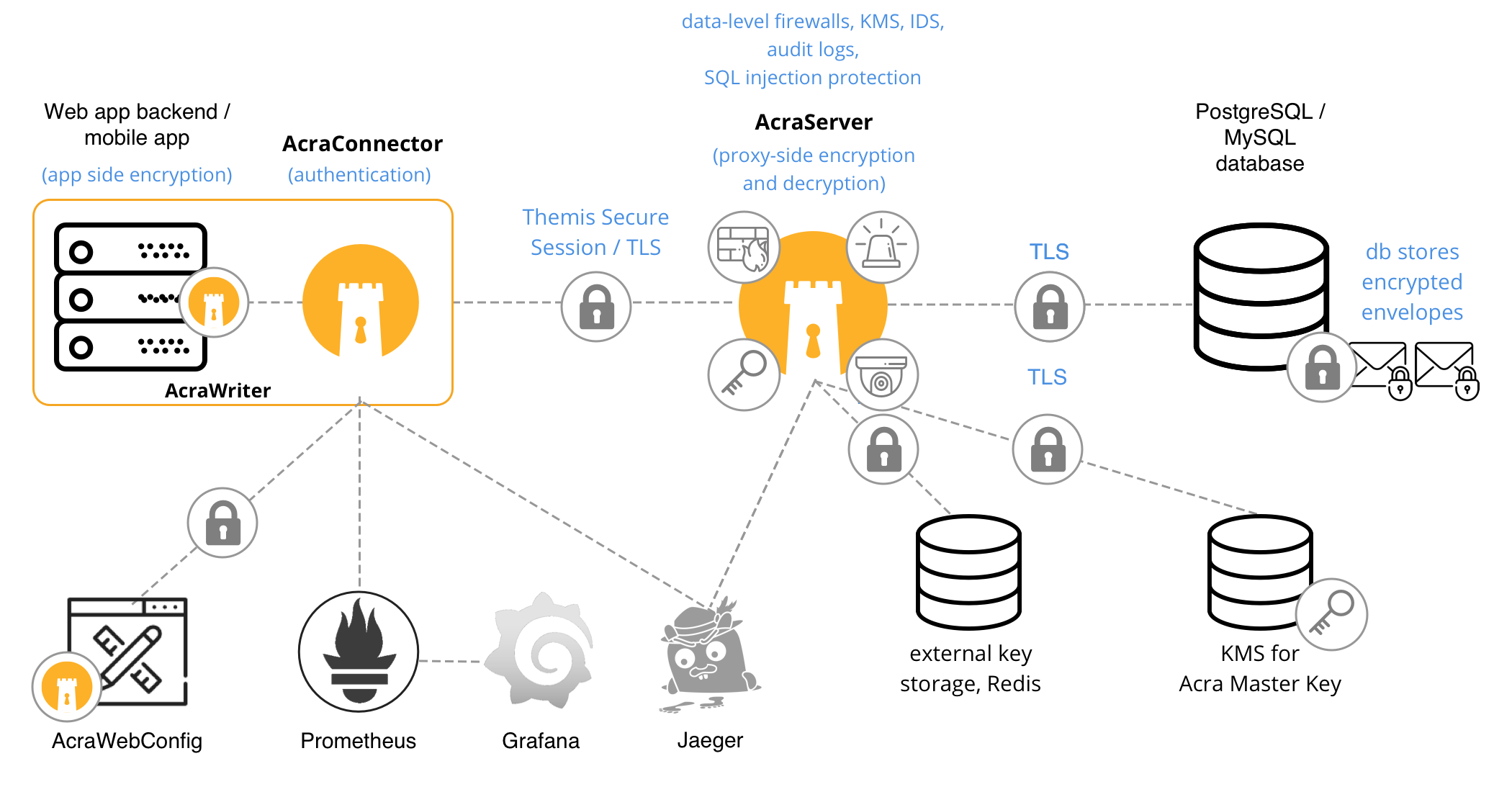 It is strictly recommended to host AcraServer on a different machine (virtual or physical), isolated from both client applications and the database.

This comes from the fact that Acra works with a sensitive data (such as encryption keys) and isolation will decrease risks of other components doing malicious things with it.

When using AcraServer, it is considered that you trust it, but do not trust the database. Anyway, AcraServer won’t be able to decrypt data for which it does not have the encryption keys, as well as it won’t decrypt data for SQL clients not supposed to access it.

In many cases using SQL proxy would be a desired solution as it is quite easy to integrate into existing infrastructure. Also, it provides a whole complex data protection stuff.

However, in cases when you need to make application the only component that interacts with plaintext, AcraServer won’t help you, you will have to use things like AcraWriter to encrypt data on application-side before it leaves.

Refer to Scaling and HA to learn how to scale and support growing infrastructure when you use AcraServer.